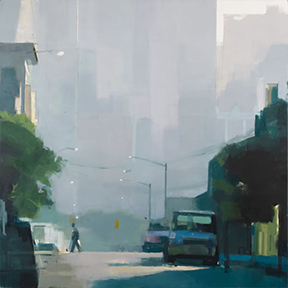 Painted Landscapes: Contemporary Views presents the American landscape as depicted by some of the most compelling painters of our time. The artists use the traditional genre of landscape painting in compelling new ways, addressing contemporary issues of land use, nature appreciation, and ecology through their paintings of the American environment. The exhibit examines landscape paintings in terms of their historical inspiration, their formal elements of structure and form, and their theoretical underpinnings in which a landscape could be read as a specific location or as a place of human experience.

The exhibit features key aspects of what defines landscape paintings, including History & Inspiration (documenting change in America from a rural, agrarian society to the urban populous place it has become, capturing the countryside, the seaside, and all the places artists live and work), Place (whether natural or man-made, urban or rural, real or imagined), Structure & Landscape (either imposed upon the natural landscape through man-made structures or in naturally occurring formal features of the landscape itself), The Tree (depiction of the common and familiar tree), and The Act of Painting (where the subject of “landscape” and the place depicted are almost secondary to the process and stylist choices of the artists).